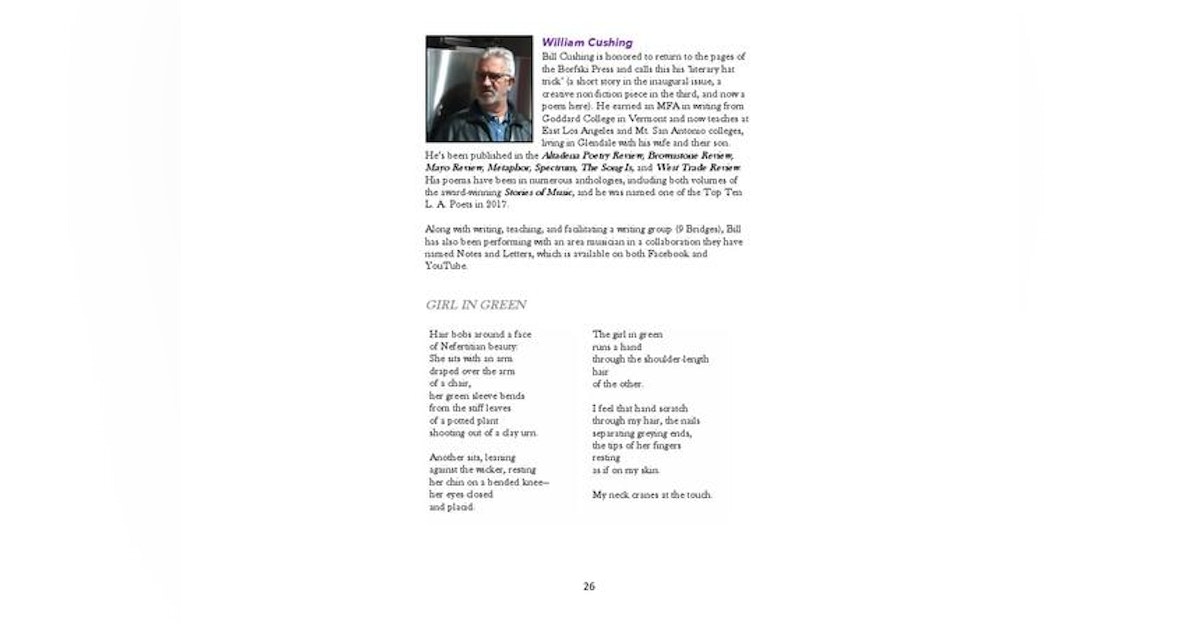 Season 2
Bill Cushing has lived in Virginia, New York, Pennsylvania, Missouri, Florida, Maryland, the Virgin Islands, and Puerto Rico before moving to California. As an undergrad, he was called the “blue collar” poet by classmates at the University of Central Florida because of his years serving in the Navy and later working as an electrician on oil tankers, naval vessels, and fishing boats before he returned to college at the age of 37. He earned an MFA in writing from Goddard College in Vermont and teaches at East Los Angeles and Mt. San Antonio colleges, residing in Glendale with his wife and their son. As a writer, Bill has been published in various literary journals, magazines, and newspapers, including Birders World and The San Juan Star. His short stories have appeared in Borfski Press, Newtown Literary Journal, and Sediments. He had poems in both volumes of the award-winning Stories of Music. His poetry has appeared in numerous journals, both in print and online, including Avocet, Brownstone Review, Mayo Review, Penumbra, Spectrum, The Song Is..., and West Trade Review. When not teaching or writing, Bill facilitates a writing workshop in Eagle Rock, California (9 Bridges). He also performs with a musician in a project called “Notes and Letters.” He invites anyone interested to visit and “like” their Facebook page or check their youtube page by searching “Chuck Corbisiero Bill Cushing Notes and Letters.”A nominee for both a Pushcart Prize and Best of the Net, Bill was named as one of the Top Ten Poets of L.A. in 2017, and in 2018, he was honored as on the ten poets to watch in L. A. His recent book, A Former Life, was released in June 2019 by Finishing Line Press, and he won the 2019 San Gabriel Valley Chapbook Competition with Music Speaks, a volume currently being prepared for wider release.